The International Summer Academy of the Early Music in Warsaw 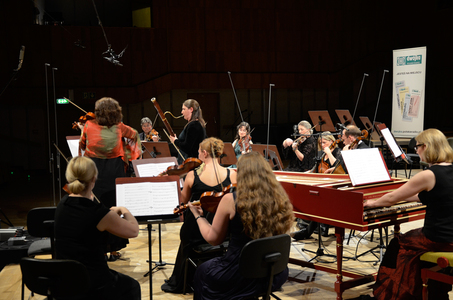 The Human Voice is the predominant theme of our Summer Academy this year. Although the theme title conveys a variety of meanings, the closest direct association leads us to the singing voice. And so vocal music will never cease to be present at the master classes for singers, and at concerts. The performance of the Utopia ensemble becomes the event extraordinary of the season, focused on commemorating Dirk Snellings, great musician and lamented friend, who died this year. Though the Ensemble performs mostly Renaissance music, sung by a multiplicity of voices, the concerts provide an opportunity for performing vocal music belonging to other styles and times, starting with medieval music and ending with Classicism. The collage of differing programs, to be performed in the sequence of concerts, will present various voices and demonstrate how vocal technique evolved with time. It will also provide an opportunity to discuss the ways of reproducing the old performing techniques today.

The human voice was thought to be the most excellent of the instruments, but excellence was sought in performing on other instruments. Performance on musical instruments tended to imitate human voice with its expression, elasticity and articulation. When we study the voice at the Summer Academy, we will present the effects of that phenomenon in a variety of ways. Notably, the cornet was the instrument that was closest to the human voice.

The lectures that are included in the schedule for MLAMD this year will discuss numerous important aspects and problems of the voice. Those lectures, apart from the participants of the master classes, will be open to all members of the public who wish to learn more on the subjects, like articulation in instrumental music (and its associations with the vocal music), links and interaction between words and music in old musical pieces, and the problems of voice projection (so important a matter for singers and others alike).
We shall follow the tradition of the past editions of MLAMD and will provide classes and public performances of the old dance. Referring to the issues of the voice theme, we shall investigate here the symbolic language of the dance, which was particularly important in Baroque. The essential meaning of gestures, dance figures and garments; factors transforming dancing even to the accompaniment of instrumental music could have become the tale.
We also intend to design one of our dancing classes to be suitable for children. Lamentably, music education for the youngest is still a rare phenomenon in Poland, and it is worth popularizing it, as an excellent method to incite and develop musical and historical consciousness and identity.
www.mlamd.pl